Hobart, capital of Tasmania is a fun and vibrant city where you can also soak up the history of Tasmania. Enjoy the convivial lifestyle and use it as a base from which to explore southern Tasmania. 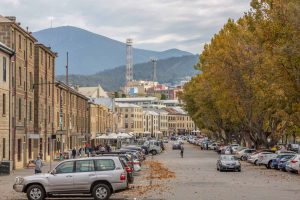 Mona Foma is Mona's summer festival, an eclectic mix of music and art, plus food, booze and more. Credit - Phil Kitt
Concierge Booking Our team is here to help you plan, quote and book extraordinary Tasmanian experiences.
Book Yourself

Things to Look for in Hobart

Named after the Duke of Wellington’s victory at the Battle of Salamanca in 1812, Salamanca Place has become a focal point for Hobart.
Salamanca Place runs along the south side of Sullivans Cove. It is next to Battery Point. The Art Centre, restaurants, and shops will be sure to fascinate you.

Since its opening in 1972, the Saturday Salamanca Market has become a Hobart Institution. It is open from 8.30am to 3.00pm each Saturday, rain or shine.

The area around Sullivans Cove is a mix of historic buildings, piers and docks. Cruises to MONA leave from the Brooke Street Pier.

Look to the south side of Sullivans Cove and you will see Battery Point sticking out into the Derwent. Arthur Circus Park is the centre of Battery Point. Many of Hobart’s best preserved old buildings are in Battery Point.

The Tasman Bridge joins the Eastern shore to the Central Business District, Salamanca Place and Battery Point. If you arrived from the Hobart Airport you will have driven into the City over the Tasman Bridge. You will see it just north of Sullivans Cove, being crossed by the A3 Tasman Highway.

If you want to be close to all the action, the restaurants, the Salamanca Market and Battery Point, look for a hotel in the area between Davey Street, Sandy Bay Road and Sullivans Cove. You will be able to walk to everything. Alternatively, there are many options throughout the entire city where you can decide to rest your head.

The Central Business District shopping area is just inland from Sullivans Cove. Walk up Elizabeth Street – you will see the tower of the old General Post Office on the right and Franklin Square on the left. The main shopping block is between the Elizabeth Mall, Liverpool Street, Murray Street and Collins Street.

MONA is about a 20 minute drive from Sullivans Cove. Take Hwy#1 the Brooker Highway north out of the city. Watch for MONA sticking out into the Derwent River on the right at Berriedale. Consider winding your way back into Hobart on the old Main Road through Glenorchy, Moonah, Newtown and North Hobart to get a real feel for the city.

Follow Davey Street south from Sullivans Cove, then there will be a turnoff to Pinnacle Road to get to the top of Mt Wellington. It is just a few kilometres from the City, but you will climb 1,271 metres (4,177 feet) for fabulous views out over all of southern Tasmania.

Cross the Tasman Bridge to the Eastern Shore, then take the B31 Richmond Road up the Coal River Valley. It is about a 20 minute drive to Richmond.

Take Elizabeth Street north, up the hill to North Hobart. Some of the best and trendiest of Hobart’s restaurants are found on the Main Road in North Hobart. It is about 5 minutes by cab.
Things To Do

48 HOUR CITY LOOP TICKET Hobart
$45per Passenger
The Red Decker is the official sightseeing tour of Hobart featuring the city's best sights and attractions. Use your 48-hour…
View More
OUR PICK

See All Activities
Places To Stay

Here are some reasons to book with us

No one loves Tassie more than us
We love Tassie We love the place and want to show you the very best that our island has to offer.

We have the best hints, tips and secrets
We'll give you local tips We are Tassie locals and know the in's and out's of our beautiful Island. We are here to give you locals tips.

We are a local Company
We are based here Our company is based in Tasmania, not an overseas multi-national.

We can customise your holiday to suit your interests
We are creative We love nothing more than to custom build you a special holiday around our island based on your interests, passions and needs.