Tasmanian devil - The world's largest carnivorous marsupial and is found only in Tasmania.

A Humpback breaches off the southern coast of Tasmania Australia

Dolphins at play
Image thanks to: Tourism Tasmania & Gautam Bawa

Platypus swimming in a Tasmanian creek.

Wombat at Cradle Mountain
Image thanks to: Aydan Marrier

About the size of a small dog, the Tasmanian devil is the world's largest surviving carnivorous mars...
Image thanks to: Wai Nang Poon

Australia has a thorny reputation for wildlife and is well known for its creepy crawlies and venomous critters. The worldwide distinction is so prolific that you might think the continent is covered in mythical beasts. While that reputation might be well earned for the mainland continent, the Tasmanian island is a different mythical beast altogether.

The Tasmanian island, long detached from the Australian mainland, is covered in incredibly curious marsupials while its waters are full of majestic creatures. Simply put, Tasmania is one of the best places on planet Earth for wildlife viewing. You'll even find the Tasmanian Serengeti on the north side of the island.

The cartoon-famous Tasmanian Devil spins like a tornado to antagonize Bugs Bunny in Looney Tunes. Appropriately named Taz, this dopey character is excitable and aggressive just like the real Tasmanian Devil. These creatures, about the size of a small dog, forage in the Tasmanian wilderness in small packs. They become incredibly excitable and aggressive when they find a carcass to feed on. They often growl at each other and nip to draw blood. And pound for pound, the devil has the strongest bite on planet Earth. Image thanks to Tourism Australia & Graham Freeman.

The males use this bite during mating season. They fight each other rather aggressively for the right to a female while the victor bites her neck to drag her back to his den. After mating, he must protect her for a 21-day gestation period or else she'll be found by another male. Mating results in 40 to 50 young who learn to fight each other quickly for the right to feed on one of the female's four teats.

But don't let this brutal lifecycle fool you -- the Tasmanian Devil can be a curious and loving creature. While it's never advised to approach a devil in the wild, domesticated devils can make for a good snuggle. In fact, many fall in love with this endemic animal and keep them as pets. They can even be imported to other countries. Unfortunately, a strange case of contagious facial cancer has decimated more than 70% of the wild population. The Australian government is hard at work trying to conserve this endangered species by domesticating large swaths of the population.

The wombat is endemic to the Australian continent. These lumbering marsupials are tame, look to be overweight and are rather homely. It's the perfect recipe for "ugly-cute" which make them lovingly endearing. This 30-kilogram critter rears its young in a backwards-facing pouch which prevents the joey from being covered in soil when the wombat digs with its incredibly powerful clause. These animals use an extensive patchwork of burrows and feed exclusively on vegetation like grass, herbs, bark and roots. It's difficult to catch a glimpse of these nocturnal marsupials but your best bet is in Tasmania's Serengeti -- The Narawntapu National Park on the North Shore. Image thanks to Paul Fleming.

You'll find this endemic marsupial struggling its way through dense vegetation. It uses a short tail and stocky legs to push its way through the Tasmanian bush. It has a relatively tame color that ranges from a dark brown to gray but always features a whimsical reddish-brown belly. If wallabies are mini-kangaroos, the Pademelon is a mini-wallaby. These fearless creatures can be found all over the island from the remote national parks to the suburbs of Hobart. Imagethanks toTourism Tasmania & Masaaki Aihara.

The platypus defies all categorization. This intriguing animal has webbed feet, a duck's bill, a beaver's tail and it lays eggs. In fact, it's the only mammal on planet Earth that does not give live birth. And while both male and female platypus are born with ankle spurs on their hind legs, only the male platypus delivers venom. That's right, this incredibly unique and beautiful creature can actually poison you. But don't worry, these skittish creatures are incredibly rare and it's unlikely you'll ever be in a position to be stung by a male platypus's spur.

Catching a glimpse of the platypus is difficult. They can often be found in the slow-flowing waters of streams, lakes, rivers and near dams. They're most common in the lakes of Tasmania's Central Highlands and in the rivers of the south and northwest coasts. Interestingly enough, the Tasmanian platypus is larger than the mainland Australian duckbilled platypus.

Despite the fact that the waters around Tasmania are cold, you are likely to see dolphins. Bottlenose dolphins love the waters of Macquarie Harbour as well as the waters around the Tasman Peninsula and Bruny Island. These intelligent creatures love to race alongside tour boats and ferries in Tasmania's southern reaches.

Otherwise known as Blue Penguins or Fairy Penguins, these tiny flightless birds are the smallest Penguins on Earth. They love to go out into the cold depths of the Tasmanian waters to hunt during the day and they always come back to their subterranean beach homes at dusk. That's when you'll catch a glimpse of these incredibly cute land-and-sea creatures.

These strikingly blue penguins are adept in the water, but they can be a bit clumsy on land. They always come back home at dusk in formations called rafts that are similar in V-shape to migrating birds. It's endearing to watch them struggle to stand on the soft sand of the beach while small waves topple them over. They waddle back to their homes which are simply holes dug into the sand dunes, and call to each other before retiring for the night. Image thanks to Tourism Tasmania & Chris Bell.

Tasmania experienced an economic boom back in 1800's due to mining, timbering and whaling. In fact, the remains of old whaling stations can be found on the southern end of Bruny Island. The stations were built to catch the Southern Right Well as it migrated across Tasmania's southern reaches. And that whaling has diminished the numbers of Right Whales on planet Earth. But conservation efforts have allowed this rare whale to flourish and sightings in Hobart's River Derwent have been reported. Your best bet to see one of these majestic creatures is from the cliffs of South Bruny Island National Park during migration season between June and October.

Humpback whales also make Tasmanian waters their homes. You'll be able to catch these whales migrating northward to the Australian mainland for mating between May and July. They then migrate back South between September and November. Best viewing points include Frederick Henry Bay and Great Oyster Bay. You'll also be able to jump aboard whale watching ships which give you up close experiences with these massive sea creatures.

When to see whales?

See All Activities
Wildlife - Where to Stay

Pedder Wilderness Lodge Strathgordon - South
Find A Rate
Situated on a lake, this hotel is within 1 mi (2 km) of Jacks Track and Lake Pedder Lookout. Teds…
View More
OUR PICK

See All Packages
Wildlife In Tasmania Tasmanian Devil
People Who Looked At This Also Viewed... Cradle Mountain – Things to Do 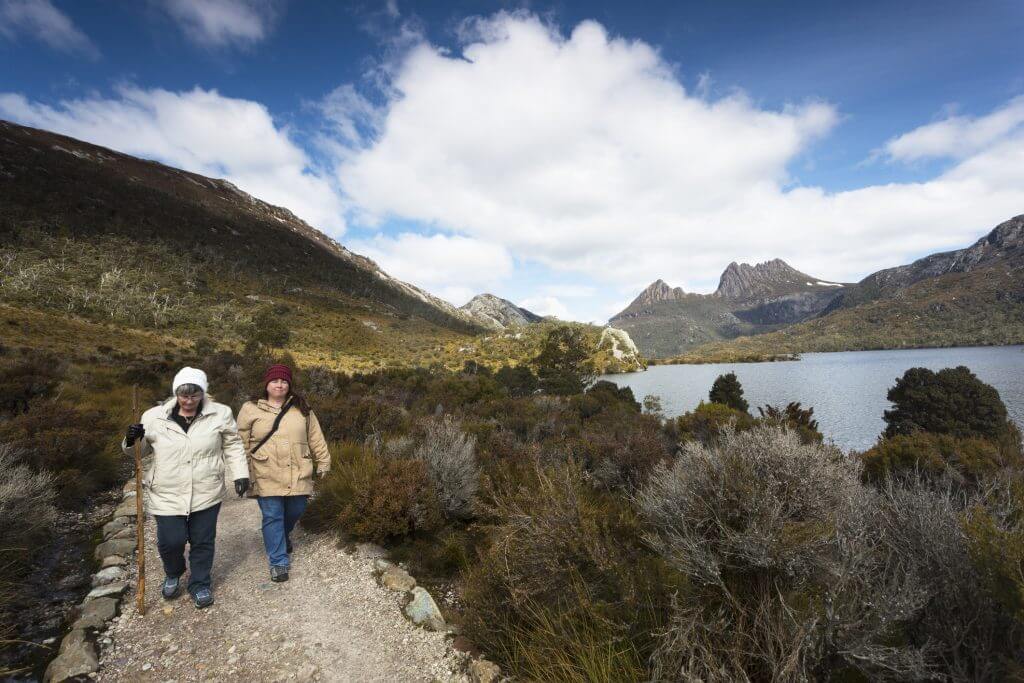