Found in only a few places on Earth. Tasmania is home to one of the best examples of these impressive geological wonders! Looking at this rock formulation it's hard to believe that it was created by nature and the elements and not man made.

Remarkable Cave is located on the southern coastline of Tasman peninsula some 12 km south of Port Ar...
Image thanks to: Paul Fleming

Tasmania's (if not Australia's) most spectacular and adventurous day sea kayaking tour. Get up-close...
Image thanks to: Sean Scott

Doo Town overlooks the southern end of Pirates Bay not far from the Port Arthur Historic Site. The t...
Image thanks to: Tourism Tasmania & Adrian Cook

Port Arthur was established in the 1830s as a penal settlement. It remains a physical chronicle of a...
Image thanks to: Tourism Tasmania & Gene Goldberg

This little tourist spot just an hour’s drive from Hobart is a photographer’s dream come true. A natural wonder, it’s named for the tiled-like appearance of the rocks along the water. This geological phenomena is a sight to behold for nature enthusiasts and visitors who enjoy the the unique aspects of the Tassie wilderness. In addition to the rocks themselves, the Tasmanian crabs and other wildlife living in the crevices of the rocks are sure to delight the curiosity of animal lovers.

A view of the rocks can be seen after a short walk from the car park. However, if time allows for it, it’s worth a trip down several sets of steps to appreciate the rocks and and the surrounding areas close up.

The pavement is near the small town of Eaglehawk Neck, which is considered the hub for many attractions of the Tasman Peninsula, such as the Port Arthur Historic Site. It is a 1 hr. drive south of Hobart and a popular region for tourists to visit. Image thanks to: Tourism Tasmania & Andrew McIntosh.

How Was it Formed

The tiled rocks are a stunning sight formed mostly of siltstone that formed about 300 million years ago. Essentially, the rocks were fractured by the movement of the Earth and resulted in what is called jointing. Jointing itself is not incredibly uncommon, but the presence of salt crystals and consistent erosion by the Tasman Sea’s waves and sediment deepened the pattern to give it its startling appearance.

Professional photographers and amateurs alike will be thrilled to explore the angles and views that can be captured in this gorgeous spot. In fact, hours could be spent experimenting with light levels, tidal patterns, and wildlife sightings.

The amazing natural coastal feature known as the Neck is a thin strip of land connecting the Tasman Peninsula to the Forestier Peninsula. This beautiful stretch is about 400 meters long and has a deep and dark past. Once guarded by a line of dogs, it prevented convicts from escaping the nearby prison settlement of Port Arthur. There is now a sculpture to mark this area and commemorate convict heritage. There are also shipwreck sites here as well, adding to the mystery and intrigue of the region.
In addition to the Tesselled Pavement, other geological wonders are nearby including the Tasman's Arch, Blowhole, and Devil's Kitchen.

For outdoor enthusiasts looking to explore the region, some popular activities include bushwalking in the Tasman National Park , rock climbing, kayaking, diving, and surfing. There's also an Eco-cruise that provides striking views of the sea cliffs and local wildlife such as seals, penguins, and dolphins.

Visitors staying in the region may consider Doo Town, a holiday village known for naming their houses with cute sounding names including “Doo”. Image thanks to: Tourism Tasmania & James Bowden - Bush walking

See All Activities
Tesselled Pavement - Where to Stay

Lufra Hotel and Apartments Tasman National Park - Tasman Peninsula
Find A Rate
Offering direct access to the beach, this Eaglehawk Neck hotel is in the historical district and within a 10-minute walk…
View More

The Mussel Boys Taranna - Tasman Peninsula
Find A Rate
Situated by the sea, this cottage is 0.4 mi (0.6 km) from Tasmanian Devil Unzoo and within 6 mi (10…
View More

Sea la vie
Find A Rate
Offering direct access to the beach, this Murdunna vacation home is 9.8 mi (15.8 km) from Eaglehawk Neck and within…
View More 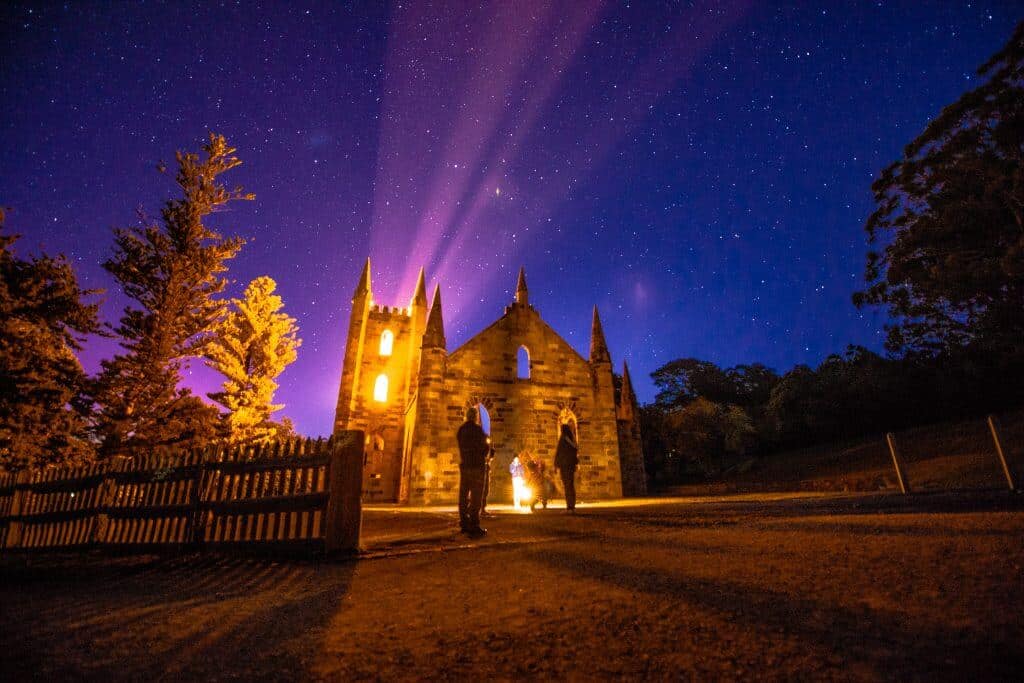